A Migrate Permissions job moves data from a source platform to Box, and transforms the permissions held by users on the source to respective users on Box.  You can choose how to specify the locations you want – i.e., the paths for data on the source and their destinations on Box.  You can also choose how to specify source to Box user permission mappings – i.e., if joe.lee@company.com is a sharee on the source, what account will be the sharee of the same data once it is moved to Box?  Your choices for defining Locations and Users and are:

You can use the UI and spreadsheets in any combination that works best for you.  This article will focus on configuring Locations and Users with spreadsheets.

The bulk upload (spreadsheet) feature is an option and is not available on all Shuttle accounts.

On the Select and map file locations screen, download the spreadsheet template and open it: 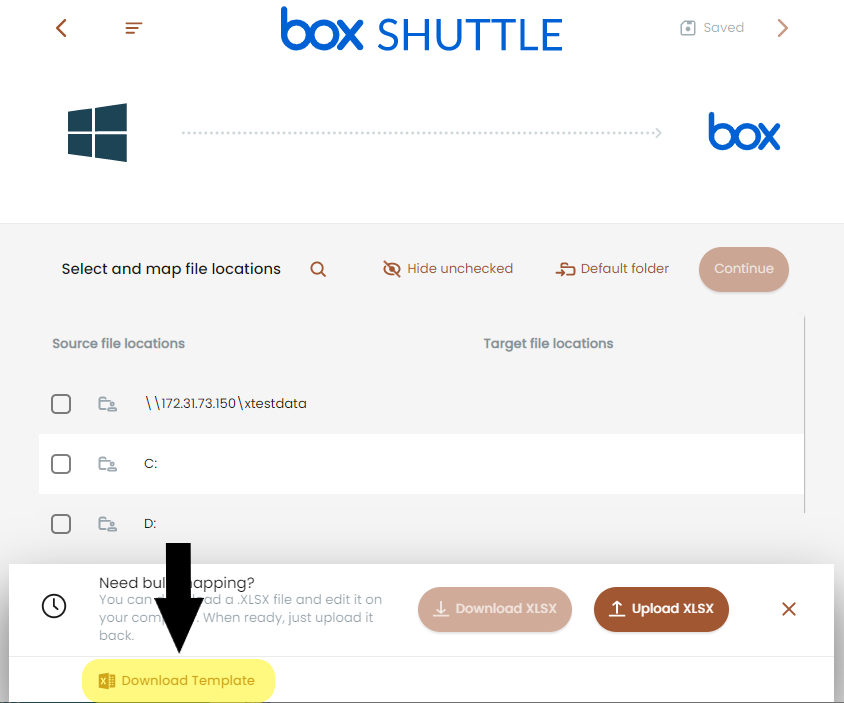 About Move Contents Only

Migrate Permissions jobs structure paths on the target according to a strategy called ‘Move Contents Only.’  That means it will move the contents of the terminal source folder to the path you designate in Box.

Most users will want to add the terminal stanza from each source path to the target to preserve the structure.  Here are some examples of source and target paths, and the results:

For source paths that are files – i.e., /Folder/filename, the following conventions apply:

Best practices are that if you have a source path that includes a file, always specify a target filename in the path like this:

A second best practice is to avoid specifying the same target account and directory for two different paths, because it results in merging the contents of the two directories.  For example, if you have two source paths of /Folder/subfolder1 and /Folder/subfolder2 that both have a target account of username@company.com and target path of /Boxfolder:

This can create a lot of confusion and can be avoided by configuring a unique destination – consisting of source account/target path for each of your source paths.

If you are transferring more than one cloud account (such as Box. Dropbox, OneDrive, and Google Drive) to a common target account and path on Box, Shuttle will invoke a feature called namespacing.  Namespacing automatically creates a target directory on Box with each source username as follows:

Namespacing prevents the contents of multiple source accounts from getting merged into a common path.  It happens automatically and cannot be suppressed.

Running a simulation is essential to confirming that the target paths you expected are in fact invoked.  While Shuttle does not force you to run a simulation, they can highlight configuration errors and ultimately save time in reconfiguration.

To configure user and group mappings, you will also download a template:

It will be pre-populated with all of the users and groups who share data in the source data set.  Map each user and group respectively to a target Box user and group, or enter a ‘Y’  in the ‘Skip’ column to prevent any permissions for that source user/group from propagating to Box.  All listed users and groups must either be matched to an internal target account or skipped for the uploaded sheet to validate.

When the spreadsheet is complete, save it and upload by clicking the ‘Upload XLSX’ button.  If it validates, you are ready to move on to the next step of your migration.  If it fails to validate, you will get an error sheet that can be downloaded:

Fix the errors and upload again until you get a valid spreadsheet loaded.  You can then move on to the next step in configuration.