The ultimate goal is that CFP must have a complete and unambiguous directive on where you want your data to go on the target, but it also provides you with an extensive library of directives to send your data to the target in flexible configurations and sharing relationships.

CFP by default uses the owner of a file or folder on the source to suggest the owner on the target. This is a good option if you are migrating Windows home directories and you wish to use a part of the source path to determine the target owner. As with all the CFP instructions in the map, you can adjust these defaults to fit your specific needs.

What is the difference between a user mapping job and a permissions mapping job?

Account mapping jobs that have a Windows source will display two options on the Accounts and Files page:

Use the name of a directory on the source system: Select this option if you are migrating Windows home directories.

Use the file owner from the source system:  Select this option if you are migrating from a shared filesystem, such as Egnyte or a Windows file server.

The following two settings will apply to both the Paths tab and Path Conflicts tab.  These options are used to limit large listings on the Path Conflicts tabs where there are many Windows files whose permissions differ from their parent folder, and the target platform does not support that.  They can also reduce the overall size of the Paths tab listing if you have a large directory in which permissions on one or two items at a given level differs from the rest of the items.

IGNORE ACLS BELOW THIS DEPTH: Enter the number of levels of folders that you wish to list permissions on in the spreadsheet:

The following settings will only apply to the Path Conflicts tab. 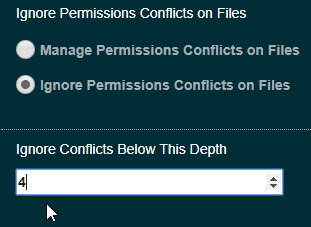 This will eliminate files from the Conflict Paths tab.

This feature is only supported for platforms where:

IGNORE CONFLICTS BELOW THIS DEPTH: